skip to main | skip to sidebar

Ben Burtt demonstrates how he made Wall-E

"Ben Burtt demonstrates how he made Wall-E come to life and answers a ton of questions. This was a presentation I attended at Pixar and it’s seriously amazing to watch Ben as he demos how he made all the Wall-E sounds and what he bought on eBay to get new sounds. If you’re a fan of Wall-E and Star Wars, I really recommend watching some of this."
-Steve Weintraub

>> Original URL
Ben Burtt Interview, Wall-E
Sheila Roberts, Movies Online Canada has put out a Q&A with WALL-E sound designer Ben Burtt, where he talks at length about the sound design process on the movie and other related topics.

SHEILA ROBERTS : What about the interplay between the animators? Typically the voices are recorded before and the sound bytes are afterwards. How did it work with this?

BEN BURTT: You’re right. Normally in animation the dialogue is recorded and locked down, takes are selected, and the animators then use those as references for timing and performance. We did actually kind of the same thing here. I started working three years ago on the dialogue for this film and auditioning voices. At first I would make up sets of sounds as auditions for Andrew. I would play a voice and some motors and I’d say, “What do you think of this? Could this be Wall-E?” He might pick out the things he likes the most and we would keep that collection aside and I would string together little montages and then we started giving them to animators and animators would just freely animate to the sounds. Wall-E could come in and play with a ball, slip and fall, or do something, and we had numerous tests, and I could see immediately of course the huge input in a performance that the animation had.

In fact, you would think I would know better, but I was really surprised. They could do amazing things with just a pose, a little movement of the head and the sound seemed so much more authentic when it was sunc up so perfectly. So we went back and forth and developed a sound and picture together and so therefore we ended up with these little character studies. You could play it like a little audition tape. The character would come in, introduce himself and talk and show off their functions so you would hear it and see it. We got confident after awhile that this is what Eve should be and this is what Wall-E should be and then they could move ahead and start animating the movie itself and put it in the story so it was a back and forth process. >> Read the Article 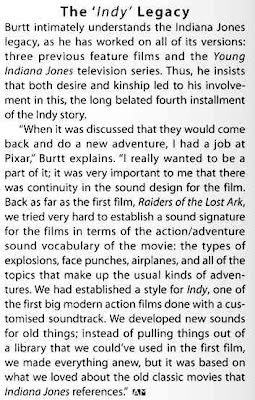 >> Read the complete article at AudioMedia

Hymns comments, “Ben's approach is really unique with Steven because they're like a couple of kids — you put them together and everyone else becomes almost invisible. They talk in a language that most of us don't understand, like Steven mentions an old movie and Ben immediately connects, knows exactly the sound he's talking about — he might even have it in his library — and they move forward in that way. And they're always talking about movies from the past to relate to the soundtrack we're working on. To be in a spotting session with those two is a joy for me.”
In this case, Burtt says, “I knew from the beginning that we'd want to refer back again to some of the sounds we'd established in the earliest films because Indy still has a whip, he still has a gun, there are going to be fights and chases — though, of course, we wanted to do new things with those sounds, too. I always try to create a world of sound for each movie I work on. With this one, I knew we wanted to start by having the original library of sounds brought up to date because they really only existed on old quarter-inch tapes. Portions of them had been copied and digitized in a different manner over the years — some had gone to PCM and Betamax, or whatever we were using in the '80s. But I didn't trust those earlier generations, so I said, ‘Let's go back and restore the whole collection.’” >> Read the article!!

Ben Burtt interview for Wall E
by Chuck the Movieguy


Sounds of Hal - the cockroach
The cockroach named Hal in "WALL-E": Hal's voice was composed of sped-up raccoon noises, and the sound of his feet skittering along the floor was made by clicking handcuffs - recorded with the help of Burtt's police officer neighbor.

>> FilmSound.org - Learning Space dedicated to the art and analyses of Film Sound Design

Ben Burtt became the world's most influential sound designer by creating the sounds for the Star Wars series.

This list was created by factoring how famous or influential a given sound is, and also considering the sound from a sound designer's point of view. For example, the Darth Vader sounds are simple to create, yet the voice from James Earl Jones became one of the most influential sounds of the series. Compare that to the voice of Poggle the Lesser, which is not as famous, but a masterpiece of cutting and pasting phonetic sounds together.

Ben Burtt interview about R2 and Jim Shima's light saber (03:06)
This video was shot by Michael McMaster and is part of the R2 builders club special DVD. Uploaded with permission.

The light saber in "Star Wars": Like many of Ben Burtt's discoveries, the light sabers were a combination of two sounds: the feedback from a malfunctioning television set and the whirring of an idling film projector.

The whip in "Raiders of the Lost Ark": Burtt recorded an actual whip, which at one point Harrison Ford demonstrated on the side of the road in San Anselmo. The "whooshing" sound of the whip in the film is a Harrier jet.

The TIE Fighter engine in "Star Wars": Burtt combined an elephant's roar (slowed down considerably) with the sound of a car driving fast on a rain-slicked road.

The cockroach named Hal in "WALL-E": Hal's voice was composed of sped-up raccoon noises, and the sound of his feet skittering along the floor was made by clicking handcuffs - recorded with the help of Burtt's police officer neighbor.

>> FilmSound.org - Learning Space dedicated to the Art of Sound Design

The Art of Sound Design